I've Got a Bad Feeling About This

A sick feeling of repugnance and apprehension grows in me as I flip through the first twenty pages of An Alien Affair, especially after reading Gris' disclaimer:

This volume has been the most difficult to relate and I must warn you beforehand that it will take a strong constitution to read.  The crimes that I have openly and willingly confessed up to this point pale by comparison.  The screams and blood are as vivid as if they were now.


Is this Mission Earth editor and ghostwriter Robert Vaughn Young warning the reader to turn back now before it's too late? 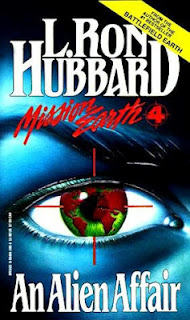 But I'm getting ahead of myself.  An Alien Affair's cover is a close-up of a human eye, albeit a human with blue skin and hair.  So not a human.  Or a Voltarian either, since they look identical to humans.  There's a badly-distorted map of Earth that would make any geographer wince overlaid atop the iris, and some red lines that I guess are supposed to be crosshairs?  Oooh, an alien is targeting the planet!

Presumably a different alien than the ones that have been on Earth for two books now.  A blue one, obviously.

As always, we're first hit by a page or two of quotes from various reviewers who must have been slipped a different book, or possibly a sack of unmarked bills.  The Buffalo News calls the series "a cross between Flash Gordon and 007," which I'll agree with in that it's probably what Hubbard was going for with Heller.  The Book World makes the curious statement that it's "Buck Rogers, H.G. Wells, Star Wars and Issac Asimov all rolled into one," indicating that they either couldn't be bothered to look up George Lucas or else thought that their readers wouldn't recognize him.  The Atlanta Journal/Constitution insists that "each chapter of Hubbard's narrative is fast-paced... espionage and intrigue prevail... Hubbard's laser-like wit and tongue-in-cheek assessment of contemporary living make it easy to read."  This is, of course, a filthy lie.

There's a map of Manhattan and the surrounding environs, and also one of... Turkey, dammit.  I hoped we were done with the place, but it looks like one or more of the half-dozen lingering subplots are going to rear their boring, distracting heads.  Two title pages, a dedication to the readers, and we're at the Voltarian Censor's Disclaimer, once again affirming that there is no such planet as Earth because no records exist of it.  Similarly, we should dismiss any fanciful stories about something called "drugs," and since drugs don't exist then someone named Rockecenter couldn't have used them to take over a planet which again, doesn't exist.

But besides these denials, the Censor's Foreword ends on a lengthy and ominous warning:

If such a planet [as Earth] did exist, it would be cordoned off as a malignant growth, not assimilated into our Confederacy.

This is most evident in the bizarre practices described in this book.  It is beyond the bounds of the most fevered imagination to think there could be such people.  It proves beyond any doubt that it is IMPOSSIBLE for such a planet to exist.


So our backwards culture is preventing us from colonizing the stars, but the Voltarian Confederacy is getting along fine with a "if we can't conceive of it, it cannot exist" mentality?

No society could possibly exist that would openly countenance such behavior, let alone professions called "psychiatry" and "psychology."  If such sexual practices as described in this volume were condoned (let alone promoted in ANY form), one would find a society were pornography was promoted and perversion promulgated.  Crime in such a society would rise to the point where even heads of state would be assassinated and entire countries destabilized through terrorism.

No, there can be no such society, let alone a planet, where such decadent extremes could be found.  It is impossible.  In time, it would destroy itself.

That is why "Earth" does not and cannot exist.


Well, this at least follows Hubbard's thesis that psychology leads to atheism, and the removal of the threat of divine retribution causes people to form roving bands of rapists, and I guess that could escalate to assassinations and anarchy.  But the "sexual practices" angle worries me.  On Voltar we saw normal things like homosexuality and prostitution and unfortunately rape, as well as less normal things, like animals for rent at a whorehouse to meet certain soldiers' tastes, and something called electric penis stimulation.  So I'm not looking forward to finding out what would disgust these aliens.

The Voltarian Translator's Preface isn't very reassuring either, as 54 Charlee Nine reports that "one of my subcomputers quit in protest and still won't talk to me and another tried to mate with itself."  There's some levity when he goes on to say how other subcomputers are writing a musical or working on the book 101 More Ways to Use Mustard and Rolling Pins or just laughing hysterically, but I can't shake my growing trepidation.

The book's Key doesn't spoil any new characters debuting in An Alien Affair, though it does have an entry for a "Control Star," a medallion rigged to paralyze any of the crewmen who took Gris and Heller to Earth, a plot point from the end of book one that I had quite naturally forgotten about.  And then there's nothing left but Gris' continued "confession" to open up Part Twenty-Nine, which I already quoted at the top of the post.

Aside from that disclaimer, though, Gris' section is actually kinda entertaining - I feel better admitting that since Hubbard isn't the guy who wrote it.  Gris complains that everything he did was Heller's fault, and proves it through his understanding of Earth psychology, Sigmund Freud, and Bugs Bunny.  After all, the Gracious Palms has extremely phallic flagpoles in front of it, "Babe" Corleone is clearly a mother figure and subject of an Oedipus Complex, and Heller's infantile nature is revealed in the "Whiz Kid" publicity persona.  The learned Soltan Gris concludes that "Heller is the source of my problems and should be killed with slow torture."  It's not just absurd, it's also a handy recap of the plot up to that point, reminding readers that Heller has offices in the (also phallic) Empire State Building, his friend's name is Bang-Bang, and Gris needs the platen sheets Heller uses to encode his report to Voltar, which are proof of his sexual aggression.

On the downside, the fact that Gris concludes his "confession" the same way the previous book ended, with Gris bedding down and convinced that Heller was doomed, kinda undermines the idea that this section was written at the end of the whole affair.  And the fact that the quick summation of the series' previous installment focuses almost entirely on the last third of the book just serves to remind us how much of a waste of time the majority of The Enemy Within was.  Utanc and Silva are covered in the same brief paragraph, while in the book itself their subplots dragged on and on.

The whole sequence ends with Gris assuring us that Heller doesn't/didn't stand a chance against all those "bomber" cars and the sabotaged carburetor and the snipers Gris hired.  So presumably Gris was/is successful in stopping Heller?  Because if Heller beat those odds surely Gris would complain about it instead of bragging how unstoppable he was the night before the race.


Back to an Intermission
Back to Part Twenty-Eight, Chapter Nine

Forward to Part Twenty-Nine, Chapter One
Posted by Nathan Johnson at 10:05 PM