Back in the Saddle

From horrible space opera to underwhelming psychological horror, we now come to... a Western?

According to literally minutes of research on Wikipedia, Buckskin Brigades was Hubbard's first book, published in 1937.  Not his first published story, though, that would be 1935's pirate tale, "Under the Black Ensign."  Its reception seems to be mixed - some praised its narrative and characterization, other critics called the writing style stilted or forced.  A modern author calls it "One of the first novels to present a sympathetic and accurate view of Indians," but since the guy in question published Master Storyteller: An Illustrated Tour of the Fiction of L. Ron Hubbard, I'm suspicious of this claim.

Still, this novel should give us another glimpse of what Hubbard was like at the start of his long and... busy career, well before the depths he would sink to when he wrote Mission Earth. 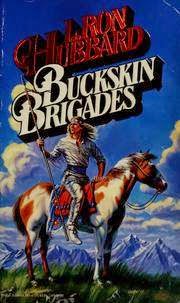 My copy's a 1987 reprinting, and yes, there was a sales controversy involving Scientologists buying the rerelease in bulk. Anyway, you'll quickly notice something about this sympathetic and accurate portrayal of Native Americans - we got us a honky on the cover.  Yes, he's got a spear instead of a six-shooter, has a simple stirrup-less saddle, and is indeed clad in buckskins, but he's suspiciously Aryan for an Amerindian.  He is of course our hero.

Because this is a 1987 reprinting, the back cover mentions how the author also wrote Battlefield Earth and the Mission Earth Dekalogy* before describing what we're holding in our hands.  Our setting is the "rugged Northwest" at the time of the Lewis and Clark expedition.  In said expedition's journal, the entry for July 27, 1806 mentions a Blackfoot chief being killed in an altercation, as well as a white man who lived with the tribe a few miles away.  "This is his story," the tale of Yellow Hair and his "daring mission across the unmapped wilderness that was filled with violence, treachery, privation and death."

There are complimentary quotes from reviewers, of course.  The New York Times Book Review says the author has "reversed a time-honored formula and has given a thriller to which, at the end of every chapter or so, another paleface bites the dust" and praises his rare enthusiasm for this type of... "romance," huh?  The Atlanta Constitution mentions the book's "true historical background" and says it "moves an exciting tale of scalping parties and forest warfare, duly seasoned with romance."  There's that word again.  And the Cincinnati Enquirer explains that "Through it ring blood-curdling war cries, shrieks, and groans of scalped unfortunates, blood.  It is the story of an empire bought by bullets."  But not a romantic one, evidently.

There's more blurbs past the inside cover, which is to say it reuses quotes from the Times and Constitution, though I'll note that the San Diego Union says the book "brings a bit of belated justice for the Indian."  There is of course a Hubbard bibliography, which starts with Battlefield Earth, contains Fear amongst some other novels, and ends with the Mission Earth series.  Another title page, a table of contents, and then an introduction from Bridge Publications to set the scene - the American Northwest, 1806, which the book reminds us was decades before the battle for the Alamo, wagon trains or cowboys.  So it's a proto-Western.

This is a time of warring fur companies, the English-led Hudson's Bay Company and the Montreal-based North West Company, who built forts, raised "brigades," and interacted with the natives.  As previously mentioned, there were also those Clark and Lewis fellows wandering around looking at President Jefferson's latest purchase.  And there was apparently some guy named Michael Kirk, a "very blond white man" raised by the Blackfoot Confederacy.

The viewpoint is the synthesis of the worlds of Michael Kirk and Yellow Hair, of the white man and the Indian, of 1806 and today.  At times, the reader will feel he is crouched by a fire, listening to the story being told by those who were there, or those who heard about it, in the same way that all good stories should be told.


Secondhand tales for an all-male audience, that's the way things should be.

On the Indians' side of the ledger, this story is meticulously accurate.  No detail was omitted, even down to such esoteric parts of Indian ritual as the fact that when pipes are passed in a lodge, they are never passed across the open door but must retrace their step until they reach the other side of that portal.


The reason for this, the publishers explain, is that L. Ron Hubbard not only grew up in Montana, he "knew the Blackfeet well" and was made a blood-brother of the tribe.  He "listened to their stories, sang with them around the fire and shared in their dances and rituals."  I guess it helps to have someone who vividly remembers his time among the Native Americans if you're trying to present them accurately, yeah?

Welllll... if you flip a few pages past the publisher's intro and some maps of the Northwest Territory (and another title page, because screw trees), you get to Hubbard's own Preface.  It's remarkably brief and to the point compared to some of his later introductions.  He claims "a peculiar kind of courage to condemn one's own race, a worse kind of cowardice to malign men dead three hundred years" and that he's trying to describe "the fur traders, not as they are thought to have been, but as they were" with the help of "the greatest authorities of those times."  No authorities in particular, but rest assured they're great ones.

Problem is, Hubbard wraps it up by saying

When I was two and a half years old I am told that I danced one of their dances to the throb of their drums.  I have forgotten.  But I cannot forget everything I have found to their credit and in this book I have tried to present them, not as they are, but at the height of their power--the mightiest body of fighters on the plains, the truest of gentlemen.


Nothing about becoming a blood-brother, and the author admits forgetting if he ever danced to their drums - which if it did happened, occurred when he was a toddler.  Even the About the Author section at the end of the book fails to mention this tribal affiliation, and summarizes his childhood with "he grew up in the wide open spaces of Montana before traveling the northwest and then the Pacific and the Far East."

I guess the publishers were consulting the official Hubbard biographies, which claim that at the tender age of six he was made a blood-brother of the Blackfoot, who have no memories or records of this event, lived a hundred miles from Hubbard's childhood home, and do not practice such rituals.  And it looks like the Hubbards moved to San Diego when L. Ron was ten.  But I'm sure the miracle child absorbed a great deal of Blackfoot culture and history in that decade he was living a hundred miles away from them.

If I have erred in presenting them, I am not conscious of that error.  I have only tried to show what it was that the voracious trader wiped out.


A handy thing, ignorance.  I haven't studied the Blackfoot, and don't know how to tell them apart from any other northwestern tribe.  Based on what pop culture I've absorbed about the Indians, I could probably spin a tale about them, and would not be conscious of any errors or inaccuracies made in the process.  Just like I wouldn't be conscious of whether I got anything right.

One last thing to note: this book was reprinted in 1987.  The Red Power movement started alongside other civil rights movements in the '50s through '70s.  The American Indian Movement was started in 1968.  Yet in the publishers' foreword, they never use the phrase "Native American," it's always "Indian."  You'd think they'd want to show some sensitivity when introducing this celebration of indigenous culture.

Let's see what we can learn from this tale of fur trappers, white Indians, blood and romance, shall we?

Forward to Chapter 1
Posted by Nathan Johnson at 7:28 PM No comments:

It's been too long since I did some writing, and too long since I've mocked Hubbard's inability to do the same.  I'm still mulling over whether I've got the right novel to work with or if I need to go back to my friendly local used book store, but one way or another I intend to spork something Soon™.  The question is how to go about that.  Blogger's recent adult policy near-miss is a bit alarming - I'm glad that they decided not to go through with shutting off all their adult blogs, but I'm also concerned that they came so close to doing so.

I don't consider Mission Spork an adult blog - its purpose is not to titillate, but to post amateur literary criticism that is hopefully entertaining.  But in the process of doing that I quote the books directly, and a few of those chapters have content that, while not technically explicit or erotica, is pretty clearly adult (and/or offensive) and stuff that I wouldn't want any kids to read.  I'm not aware of any way to mark individual posts as adult, so the whole blog gets that designation instead.  And that's always annoyed me, that such a small minority of the nearly 700 posts in this thing have such an impact on the rest.

I can't complain too much - it's not like Blogger makes me pay for this hobby of mine - but I can't help but think about whether it would be better to make my own website elsewhere.  Problem is that I'm technically inept and easily angered by uncooperative devices, so that hypothetical website would be at the end of a long and bumpy road, and there's no guarantee that it wouldn't have a troublesome content policy either.

So here's the plan:

I'm going to go through Mission Spork and clean it up.  Beyond typos and formatting errors, if I come across any quotes containing adult or other offensive material, I'll summarize rather than repeat these naughty passages.  But if any brave souls are really curious about just what Hubbard thought lesbians get up to when the lights go out, those unedited passages will still be available through links to Mission Spork Uncensored, a sub-blog if you will.  Said sub-blog will be marked adult and serve as a dumping ground for any such content encountered in future sporkings, while Mission Spork itself will be free of the adult classification.

The self-censorship rankles, but being able to remove the stigma of an "adult" blog from one that's mostly terrible science fiction might make up for it.  Once that's done I'll move on with a new book to skewer, and maybe work in some more renovations (like page ads!  Those student loans don't pay off themselves).  And if I'm still not happy with the results, I'll see about finding hosting elsewhere.

So, after months of inactivity, things on this blog will be moving again.  Thank you for your patience during this intermission.

...Isn't is strange that this blog gets to be flagged "adult" for quoting content that a sixth grader could theoretically buy from any bookstore?
Posted by Nathan Johnson at 8:01 PM 1 comment: